A Celebration of Sport – George Smolinski

On a damp October morning in 1977, 327 pairs of muddy feet tramped around Kirby Muxloe Park at the inaugural Cross-Country League race organised by Rob Osborn (the founder of the league). From its humble origins the league has grown phenomenally and the races epitomize what the league is all about – fun, fitness, fulfillment!

Over the years, the commitment of Rob, Julian Tyley, Madeleine Robins, Paul Gent, Rod Essex , George Smolinski and David Dewdney (supported at the venues by numerous others) raised the profile of the cross-country league so that it became widely regarded as a well-organized competition with fields believed to be the largest and most successful in the country for these age groups. Indeed the Daily Telegraph (28.10.05) had the headline “Leicestershire league is a model for others to follow.”

Following the retirement of George and David in 2011 the Leicestershire Running and Athletics Network (ably directed by Network coordinator, John Skevington) successfully took on the responsibility of the league and, after many years of racing over courses at Braunstone and Western Park in the City, it found a new home at Prestwold Hall to accommodate the enormous fields. Indeed, last season, the league celebrated its 100,000th. finisher since it moved to an 8 race format in 1993.

The Daily Telegraph stated, when George and David won the inaugural Daily Telegraph School Sports Matters Contribution to Sport Award in 2006 that, “Surely Leicestershire’s league is a template which should be highlighted and adopted nationwide.” 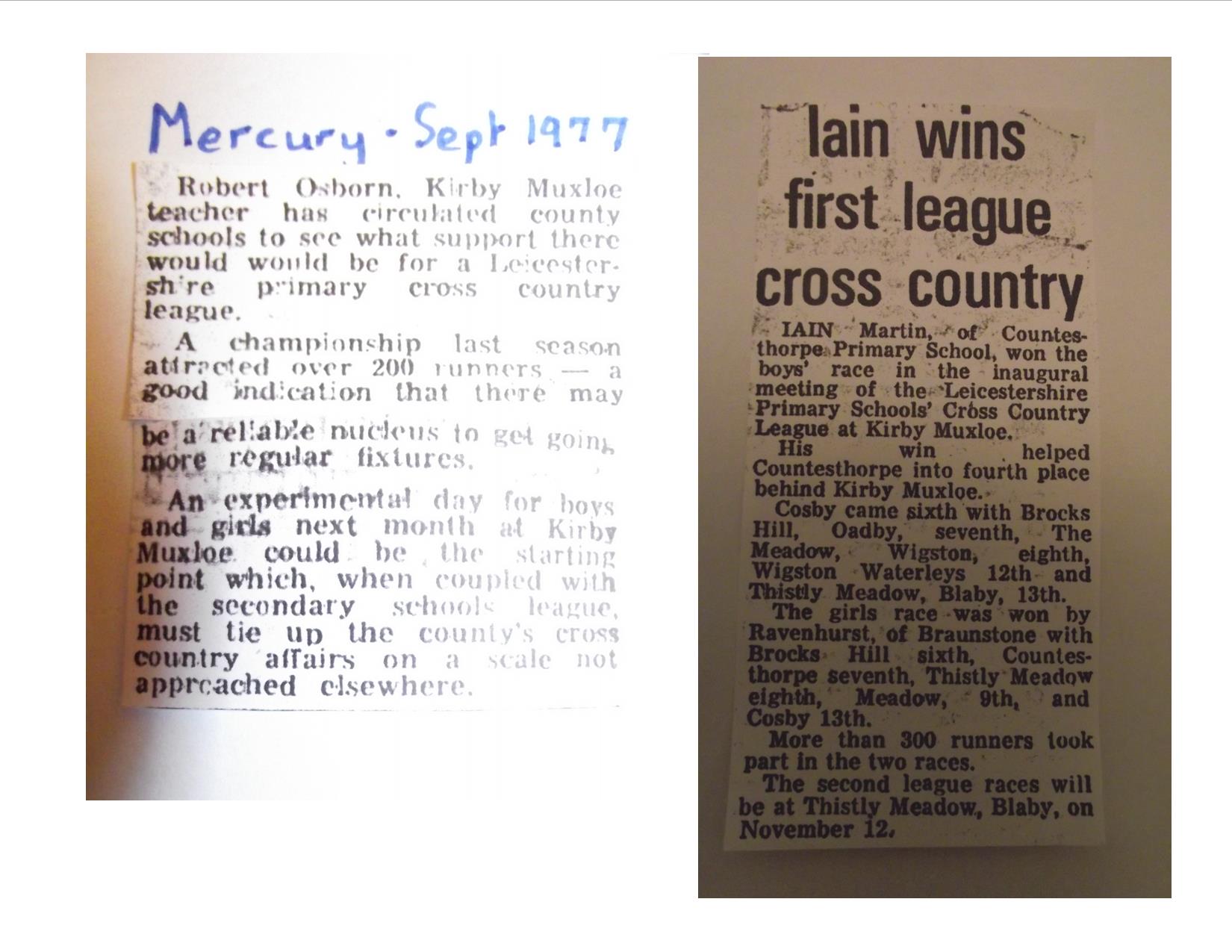 Individual and team categories are always hotly contested. However the common factor that remains is the brilliant attitude of the young athletes (both debutants and “old feet”) who come along and give of their best, encouraged by hundreds of enthusiastic and noisy mums, dads and other family members.

Our league has had a tremendous impact on school’s athletics locally. The league’s success continues to have a direct influence on secondary school and club athletics locally.The fields of the Leicestershire secondary schools cross-country league have increased as a direct result of our primary children continuing their enthusiasm for the sport into the next phase of their education. Local clubs have seen the interest that we have cultivated and are aware that positive steps need to be taken to nurture these youngsters and keep them in the sport.

Amongst the many children who began their competitive outings in our league or athletics events we can boast Lisa York (Barcelona Olympian and Women’s National Cross-Country Champion), Maxine Newman (another Olympian and English School Intermediate 1500m Champion), Helen Titterington (an international and a former national road and cross country champion), Tracey Maycock (a former Midlands County Champion), Melanie Wilkes (English Schools Cross-Country silver medallist) and Neil Allen (Mid Counties 3km Junior Champion). Nick Mapp, James Siddons and Ryan Falkner also received representative honours. Paul Miles, Hannah Whitmore and Amy Griffiths have received England vests for cross country. The bulk of the local club squads who are currently doing so well in regional and national competitions began their cross country “careers” in our events. Indeed Sam Stabler (2003 Y6 boys County Champion) and Amy Griffiths (County Champion at Y4, Y5 and Y6 between 2005 and 2007 as well as picking up two league titles making her one of the most successful girl athletes we have seen) both won their third consecutive Leicestershire and Rutland County Cross Country titles in January 2016.

Sam ran for England this year (2016) at the Loughborough International and told me that, “I missed out on European indoor selection in 2015 as I was 0.98 seconds slower than the qualification standard for the 3000m. I ran 13 min. 30secs for 5km that season (European Qualifying Standard is 13.35) but there wasn’t an outdoor European Championship so it was a year too early and unfortunately this season was injury and illness filled!” He also said, “It might be good to mention that I came 75th in my first race in year 3 as it might show that through hard work or even just perseverance that anyone can make it.”

In July 2015 Amy became 2015 European Junior Championships Silver Medallist over 1500m held in Sweden. During December 2015 she ran at the European Cross Country in Hyeres, France in the Junior Women’s race for GB where she contributed to the team silver. She recently reported that, “I had a poor winter season due to illness and an injury hit track season but I am really looking forward to getting back into full training really soon and my immediate aim is to make the U23 GB European Cross Country team, which is in Sardinia in December.”

The Daily Telegraph said in December 2006, “Future Olympians spring from events like these.” The importance of the league as a springboard into sport in general has been highlighted in recent years with young athletes, who had their introduction to competitive sport in our cross country league, crossing over into other sports. 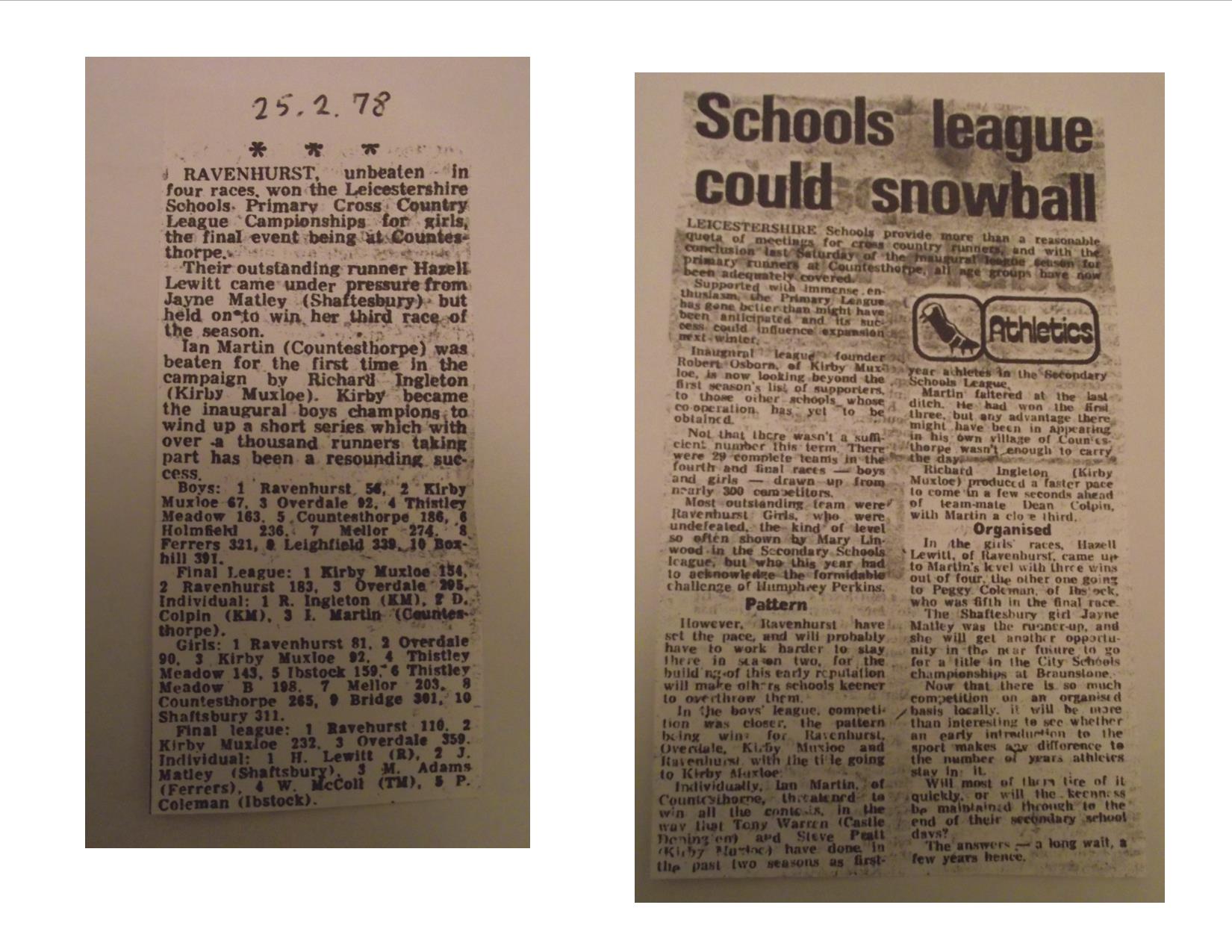 Jonny Walton competed in the league from 1998 – 2002 and made his Olympic debut in Rio where he finished 5th. in the double sculls. Jonny was selected alongside John Collins in the men’s double scull for the 2016 season. They reached the final at the European Championships in Brandenburg, finishing sixth, and improved to fifth at the World Cup in Lucerne before winning a superb silver at the Poznan World Cup – their first senior medals with the GB Rowing Team.

Emma Achurch (raced from 2004 -2007) has progressed to be the U20 all time #1 20km race walker in the GB rankings and in the past 2 years has represented GB and England at a host of international events such as the World Race Walking Cup in China and last year’s European Junior Athletics Championships in Sweden.

Ben Dijkstra is the most successful cross country runner the league has seen with an unbeaten record in all LPSAA races reaping him four league (from 2006- 2009) and three County titles. He is regarded as one of Britain’s most exciting young sporting prospects having won double gold at the Nanjing 2014 Youth Olympic Games followed by junior gold at the ITU World Duathlon championships in 2015. As well as representing Great Britain in triathlon, Ben is also a record breaker on the athletics track and has raced internationally at cross country.

With the focus on increasing sports participation and promoting the children’s health agenda this event continues to hit the right spots. Without a doubt our league remains the biggest and best of its kind in the country both in terms of the number of participants and the enormous crowds of enthusiastic supporters who cheer them on. Indeed it was the Leicester Mercury Sports Event of the Year winner in 2008. The league continues to encourage thousands of primary – aged children, within the county and city area, to represent their schools with the positive kind of sporting attitude and endeavour that should grace any sport. 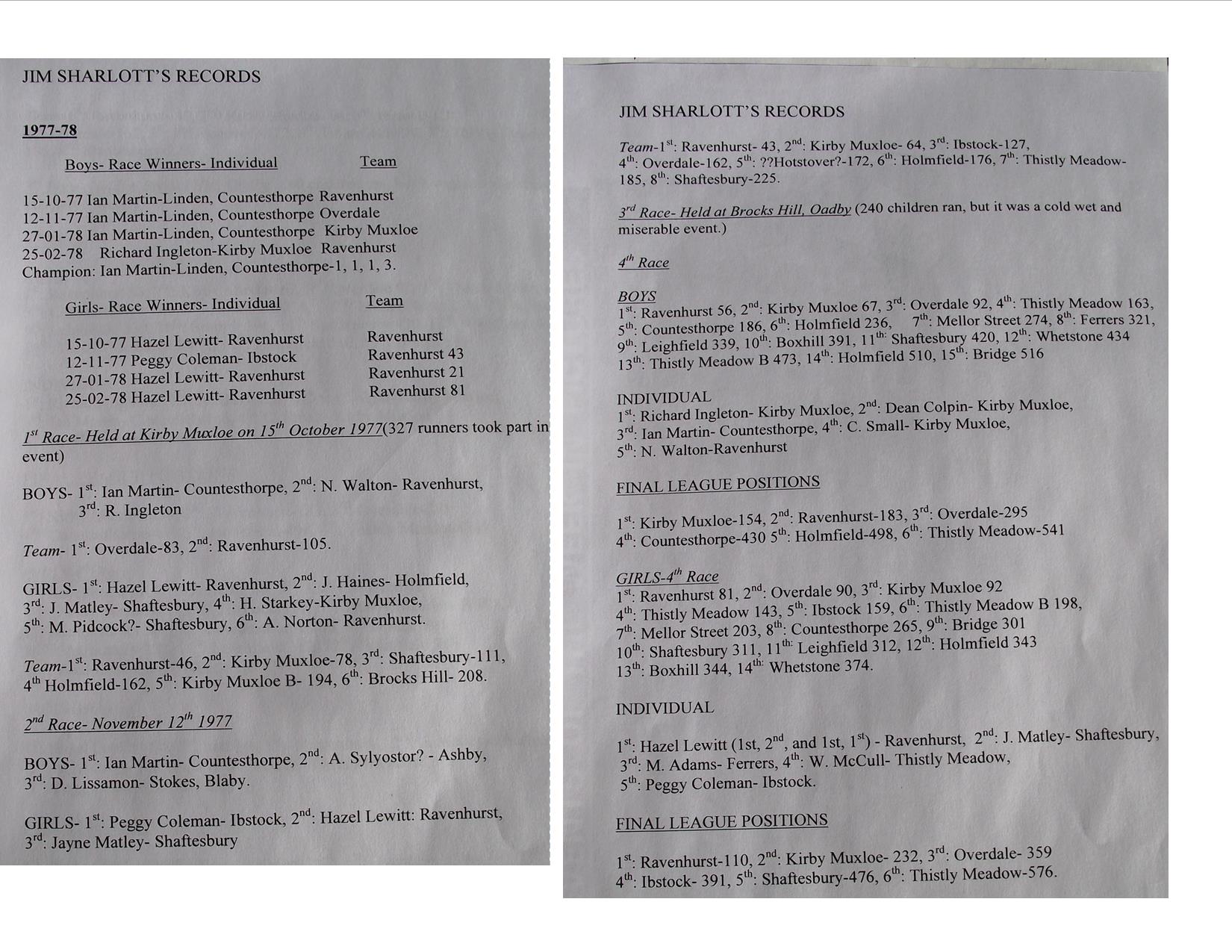 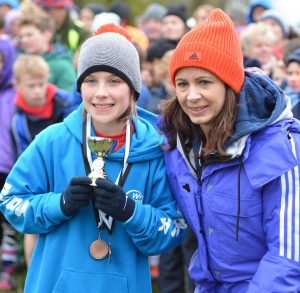 The curtains closed on the 2015 Leicestershire primary schools cross-country league in spectacular fashion with four-time Olympian and 10,000 m European champion Jo Pavey in attendance to sign autographs and present a vast array of prizes at the end of the day.
The league is beyond doubt the biggest of its kind anywhere in the UK and Jo was quick to point out just how lucky our young runners are to have this opportunity.

The three events  attracted near-record all-time numbers only being surpassed by the post-Olympic bounce in 2012 which reflects nationally the growing interest in running and especially cross-country running at the younger age groups. Despite the deteriorating weather conditions there were almost identical numbers at each of the three matches which completely bucks  the trend of the past so thank you to everyone who has supported us over the autumn it is greatly appreciated and we hope that you will be back next year! Of course the big attraction of the day was Jo Pavey who spent a good deal of the morning signing autographs and posing for photographs as well as showing her enthusiasm for the sport and interest in the young athletes by chatting to them and congratulating them on their performances no matter how modest they were. She was also keen to  meet and thank the vast array of volunteers who help put on the events and was always keen to recognise the work that these invaluable people do, she commented “I am always really grateful to the volunteers that helped put on events in my junior years as without them I wouldn’t have had the opportunities to compete and progress”. The end of the day saw Jo, prior to her long trip back to Devon, handing out dozens of medals and trophies to the individual series winners and also to the schools.

Commenting at the end of a long cold day John Skevington added “I am so grateful to Jo for giving up her time and no doubt breaking into her Olympic trials preparations to attend our event, she was truly an inspiration to many of the aspiring young athletes that took part today and I am sure that the memories of meeting her will be treasured for a long while” .

Here is THE measure of the staggering success of the Leicestershire Primary Cross Country League.

On Saturday October 31st, 2015, Lily Billington, from the Hall School at Glenfield,  was the 144th finisher in the year 4 girls race.
There were over 200 runners in just that race.

More amazingly, Lily was the 100,000th finisher to cross the line since the league was set up. Yes that is One Hundred Thousand.

Here’s Lily with a special trophy presented on Saturday. 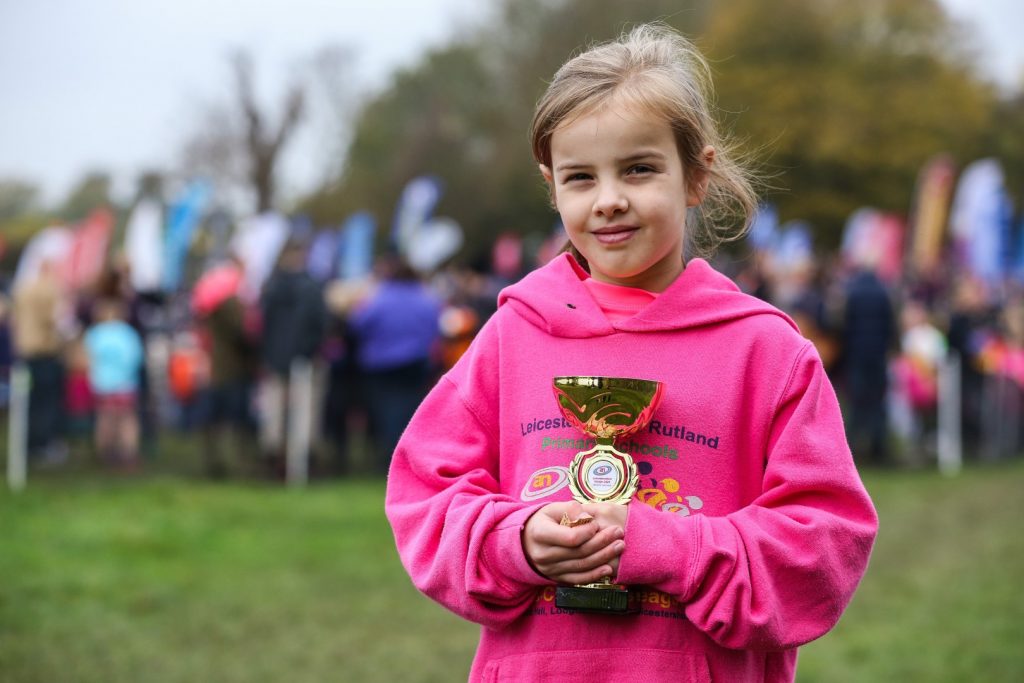 This league has been incredible and some of the parents reading this page may possibly have run at Western Park or Braunstone Park in the 80s. Please feel free to add your thoughts or comments below. (Your email address will not be shared or published).

George Smolinski, one of the small group who initially set up the league, has provided many newsletters covering the events.
The newsletters can be found on THIS LINK